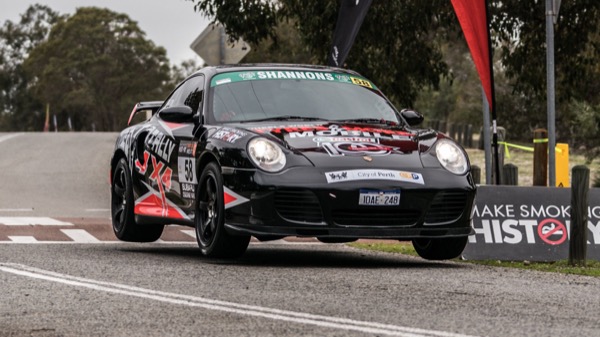 Today (8/8/19) the 15th annual Make Smoking History Targa West, Perth’s premier tarmac rally made quite the entrance revving into Forrest Place for the Ceremonial Start to the delight of hundreds of on-lookers.

Fifty rally cars, drivers, co-drivers and crew transformed the heart of the City of Perth with high octane noise and colour before being flagged off to begin four days of competition on a combination of public and private roads. 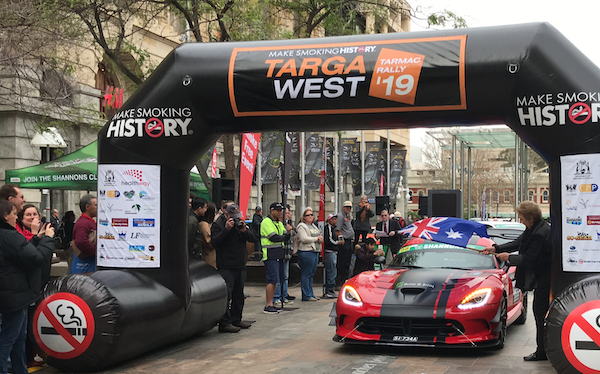 Major skipped last year’s Targa West to concentrate on racing in the Carrera Cup, and no doubt competitors are wishing he’d stayed away. This is just Major’s second motorsport event this year and he was champing at the bit to get going.

“I’m not here to come second, but more importantly, I’m also here to enjoy myself,” Major said before the flag was raised, downplaying his hunger for the win.

Hot on his heels was Peter Rullo and co-driver Jimmy Marquet, last year’s Targa West winners who had leased Major’s car that won them the title. This year, Rullo has a brand new beast, a 2019 Autostrada Lotus Exige Sport 410. Rullo / Marquet won Stage 3 by two seconds to put themselves in equal first place.

“This car is a rocket. It’s only the third time I’ve driven it and it’s comforting to know that we’re at the pointy end,” Rullo said after Stage 3.

Major / Screaigh won the fourth stage by 1 second before competitors headed to Muchea for Stage 5, a 3.75-kilometre-long stage that Rullo / Marquet won by three seconds ahead of Major / Screaigh.

An estimated crowd of 6,000 people lined the streets of Ellenbrook and cheered as drivers roared past, taking corners sideways and putting on a show. There were also kids rides, bouncy castles and more.

Taking both stage wins was Major / Screaigh winning both stages by just 1 second to finish Day 1 on top of the leaderboard 3 seconds ahead of Rullo / Marquet.

“The day has been fun, and yep we did a bit of lawn mowing in Whiteman Park,” said Major referring to a small excursion off the stage and into the grass.

“Luckily didn’t cost us much time or damage the car. The Ellenbrook stage was great fun and it was great to see lots of people turn out to watch.”

Credit to Mark Greenham and co-driver Steph Esterbauer in their Race Torque 2006 Mitsubishi Lancer Evo 9 for finishing equal fastest on the final run, Stage 8, to finish the day in third place overall just 8 seconds off the top pace.

“The Ellenbrook stage provides the perfect opportunity to bring tarmac rally right to the people’s doorstep and was brilliant to see so many of them lining the course,” Greenham said.

The battle will surely intensify tomorrow with just 43 seconds between first place and tenth on the leaderboard. 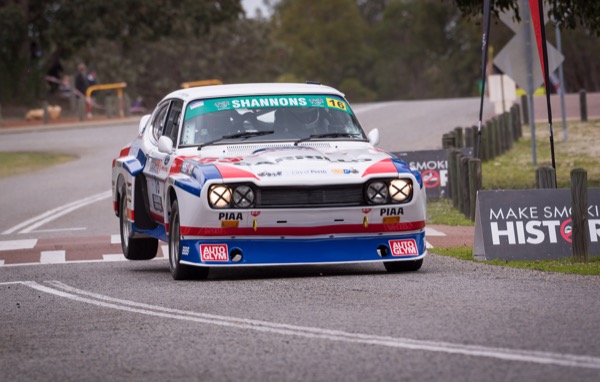 In the Competition Classic (pre 1986), the pace was set early by Simon Gunson with new co-driver this year Jurgen Lunsmann in their GTI Process Controls 1971 Ford Capri Perana, winning four of the six stages that were run today to finish 41 seconds ahead of Paul Pernechele and co-driver Ben Trager in their Tony’s Auto Wreckers 1971 Ford Falcon XY.

Bruce Lake and co-driver Peter Hall in their 1971 Datsun 240Z finished fastest by 2 seconds on the final, Stage 8 to close the day in third place, 9 seconds behind Pernechele / Trager and 50 seconds of the pace.

Stage 5 winner was Mark Dobson and co-driver Nigel Jones who incidentally is the only competitor to have competed in every edition of Targa West in its 15-year history. Their Runabout Metals Scape Metal Recyclers 1975 Triumph TR7 suffered a steering issue soon after and they were forced to retire for the rest of the day but hope to be back on the start line tomorrow.

The limited speed non-roll caged category, Targa 130, is tightly contested with just 1 second between first and second and 11 seconds between the top three.

Steve James and Nicholas Bentley in their 2009 Subaru WRX claimed three stage wins and another equal first to finish the day on top of the leaderboard by the narrowest of margins ahead of husband and wife duo Jeffery and Catherine Foster in their 2016 Porsche Cayman 981 GTS. Rounding out the top three was David and Anna Hodges in their Formula Tech High Performance 2013 Holden VF SSV.

James said that there was a clear difference driving under darkness in Ellenbrook.

“It’s very interesting driving at night, we nearly hit a water barrier on the first corner. It’s amazing to hear the crowds cheering as we went past – it’s like being on a race track!” James said. 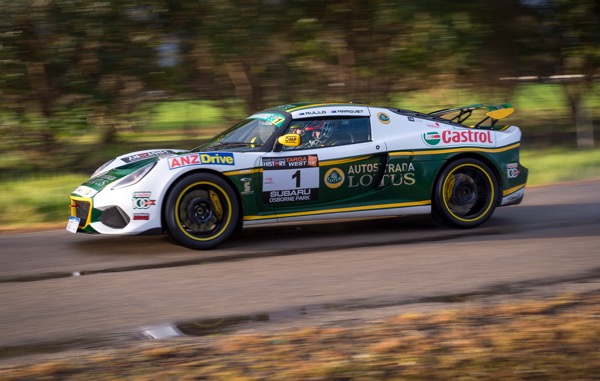 Parkerville is re-introduced to Make Smoking History Targa West tomorrow with a 5.81-kilometre stage in the morning before competitors head to Kalamunda for six stages including the famous Zig Zag for a total of 70.75 competitive kilometres on Day 2.

Spectators are reminded that there is no parking at Zig Zag and there is a shuttle bus running continuously from the Mason and Bird Café on Williams Street, Kalamunda.

Make Smoking History Targa West is on from 8th to 11th August. Competitors start at 30-second intervals, with the winner being the fastest over all 35 stages, a total of 260 competitive kilometres. The podium finish will be at Langley Park on Sunday along with the Celebration of Motorsport and Shannons Classics on the Park featuring over 600 cars, bikes and boats on display. For more information please see www.celebrationofmotorsport.com.au. 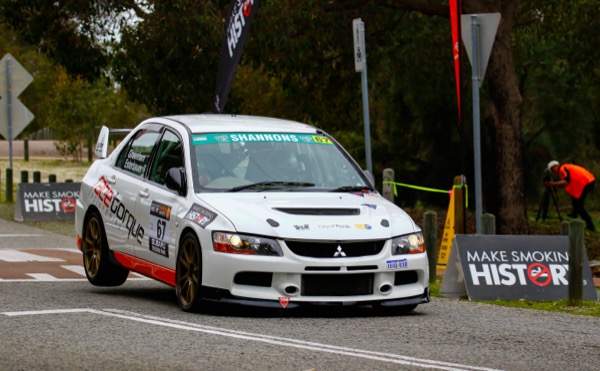