The 15th edition of WA’s premier tarmac rally saw competitors race the clock along six stages including the hair-raising steep, tight and twisty Zig Zag in Kalamunda for a total of 70.75 competitive kilometres.

It was all colour in Kalamunda with classic cars on display and a musical quartet playing to crowds as they waited for rally cars to roll into Railway Road for two services. The day’s final service was held in Forrestfield.

After shining their machines, competitors headed into Northbridge, Perth’s nightspot precinct for the Show n’ Shine on James and Lake Streets, bringing some high-octane excitement and colour to the inner-city streets from 6.00pm until 9.00pm.

Note: results are provisional at the time of writing.

The fight is on between Peter Major and co-driver Kim Screaigh and Peter Rullo and co-driver Jimmy Marquet and doesn’t look like letting up any time soon with both drivers hungry for the win.

For Rullo in his brand spanking new 2019 Autostrada Lotus Exige Sport 410, this is his first motorsport event all year. While Major, in his Totally 4×4 / Tyres and More Mobile 2004 Porsche 996 Turbo, the car that’s won the last three Targa West events, this is only his second motorsport foray for the year.

Fortunately for them both, today’s stages at Kalamunda were in supercar territory and they were able to pull away slightly from the rest of the pack with Major / Sceaigh finishing Day 2 on top of the leaderboard just 8 seconds ahead of Rullo / Marquet. Rounding out the top three was Mark Greenham and co-driver Steph Esterbauer in their Race Torque 2006 Mitsubishi Lancer Evo 9, 1:03 minutes off the pace.

“A close battle is good for the rally and good fun and I’d love it to be just seconds between us on the last stages, but we still have a long way to go,” said Major of Wembley.

“It was almost a big off, we had two wheels hanging off in the dirt and almost hit a tree, but we didn’t, so we’re all good,” he said, not skipping a beat.

“So far, so good. Besides managing minor electrical issues everything is going well and the battle with Peter Major is fun,” said Rullo of Gooseberry Hill.

“The car is great on these stages,” he added, evidenced by his impressive times that included two stage wins today, an equal-first in Parkerville and Stage 13 in Kalamunda.

“I gave it all I had in that stage, the Viper is coming in and I had to spank it pretty hard, but we made up some of the time we dropped in Ellenbrook last night,” said Cates of Bunbury.

“There’s a vibration in the rear when we hit 190 – 200 kilometres per hour, but then again, that could just be the driver shaking,” he joked.

Wisecracks aside, when the helmet is on, Cates is down to business and has his sights firmly set on the podium. Cates / Stafford finished the day in fifth overall.

The beastly 2017 Dodge Viper ACR Extreme 8.4 litre V10 of John Ireland is starting to show pace. Ireland, a Targa Tasmania regular who finished that event fifth outright earlier in the year has travelled from Sydney to compete in Targa West. Moreover, he’s using it as a chance to upskill sitting beside one of Australia’s best co-drivers and driver coaches, Steve Glenney, who is calling the notes.

Ireland / Glenney won Stage 11, just 1 second ahead of Major / Screaigh and finished the day in fourth place overall, 13 seconds behind Greenham / Estaubauer and 1:15 minutes off the top pace.

“I think Steve [Glenney] wants to kill me, but I want to live!” said Ireland.

“The Zig Zag is the most insane stage I’ve driven ever in my motorsport career,” said the 20-year motorsport veteran.

“I didn’t think we were going to get it around the hairpin bend, the car is as wide as the road.

“The car has a character all of its own, my mechanic named her Rosie after the AC/DC song ‘Whole lotta Rosie’ which was a song about a generously proportioned woman. He says my car has a big ass, is noisy and drinks a lot, like Rosie in the song,” Ireland quipped.

The day’s third-place finisher, Greenham, said that while it was a beautiful sunny day, he’d be happier if it was raining.

“We’re in supercar territory here and the Porsches, Vipers and the Lotus are faster here. I’m a four-wheel-drive and if it was raining, we’d have an advantage,” Greenham explained.

In other news, sixth place overall today went to Will White and Matt Thompson in their Store Local 2006 Mitsubishi Lancer Evo 9. Despite setting respectable times, White was clearly frustrated.

“I’m not quite happy with these tyres, they’re not performing as I hoped they would. The supercars are fast, but that’s what you get in a $500,000 car versus a $50,000 showroom car. Still, there’s a long way to go,” said White of Dardanup, with a shrug and a smile.

Ending the day in seventh place overall, Bill and Glenys Stagoll in their South West Petroleum Services 2006 Mitsubishi Lancer Evo 6 suffered gearbox issues but were able to continue finishing each stage in the top ten.

“We got a puncture this morning half way through the first stage and split a hydraulic line at the same time so we had no clutch,” Bill Stagoll explained.

Best performer around the Zig Zag hairpin has to go to John O’Dowd and Toni Feaver in his Truck Wholesale 2015 Skoda Fabia R5, a specialist gravel rally car that is used in Europe in the WRC2 competition.

O’Dowd’s gravel expertise was clear as he flung his car sideways around the hairpin, screeching around the corner without seeming to break stride. [watch footage here]

“We’re getting killed for horsepower and can’t get close to 200 kilometres per hour – well maybe downhill with the wind behind us we could,” said O’Dowd from Gooseberry Hill.

“Still, for a gravel rally car that’s not been fully modified for tarmac, it’s going well and I’m enjoying it.”

It was touch and go for James and Jodi Moffitt in their Cavalli Plumbing and Gas 1993 Toyota Celica who had to rectify overheating issues but they managed to finish the day. 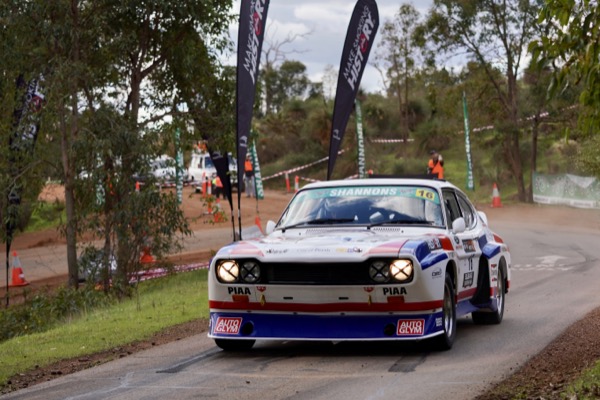 In the Competition Classic (pre 1986), Simon Gunson and co-driver Jurgen Lunsmann in GTI Process Controls 1971 Ford Capri Perana increased their overall lead by winning four of the six stages that were run today to finish 3:17 minutes ahead of Bruce Lake and co-driver Peter Hall in their 1971 Datsun 240Z.

A relaxed Gunson said he was enjoying being back in the driver’s seat at Make Smoking History Targa West after a break last year.

“The stages are great but our car is high maintenance, nothing major but we’re constantly dealing with some minor issues typical of a classic car,” Gunson of Biba Lake said.

Winner of both Zig Zag stages today was Mark Dobson and co-driver Nigel Jones in their Runabout Metals Scape Metal Recyclers 1975 Triumph TR7. They broke a steering arm on the first Ellenbrook stage last night and had to miss two stages and are therefore are out of contention for an outright placing unless they can do a Bradbury. But they were able to make it to the start line this morning.

“Today has been fantastic and I reckon we’ve posted our fastest times ever and it’s awesome to be up with Simon Gunson,” Dobson said, who has 11 years tarmac rally experience.

In the Classics, the battle to watch is between third-placed Greg Freeman and co-driver Wayne Turner in their GT Fabrication 1969 Chevrolet Camaro and Kim Stewart and co-driver Frank Zanotti in their Franks’ Classic Garage Racing Team 1965 Ford Mustang. Just 1 second separates them after two days of rallying over approximately 90 competitive kilometres.

In the top five stage times all day was Paul Pernechele and co-driver Ben Trager in their Tony’s Auto Wreckers 1971 Ford Falcon XY until the final stage today when they suffered a mechanical and were forced to retire.

“The stages today were so much fun and this car is amazing in them, at one point I was looking down to see if I had any more gears!” said Pernechele, a seven-time Targa West competitor from Gigegannup.

It was a long night for the crew of Frank’s Classic Garage Racing who finished the engine swap in the 1965 Ford Mustang at 4am this morning to keep Paul Crute and Paul Gusterson in the rally. 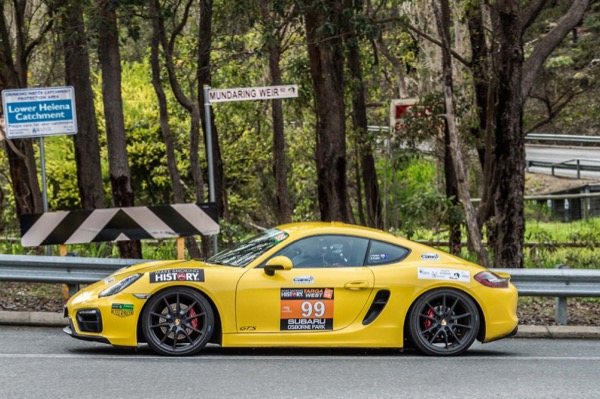 Starting the day with a 1-second lead, Steve James and Nicholas Bentley in their 2009 Subaru WRX conceded the lead after today’s first stage in Parkerville when husband and wife duo Jeffery and Catherine Foster in their 2016 Porsche Cayman 981 GTS finished 4 seconds faster. The Fosters claimed a further three stage wins to extend their lead to 11 seconds by the close of play.

“It’s great fun. This is our second time competing in Targa West and the reason we do it is the people,” said Jeffery Foster of Bicton.

Rounding out the top three 2:12 minutes behind the Fosters is Daryl Sosa and co-driver Stirling Hamersley in their Grand Prom Medical 2018 BMW M4 Pure.

David and Anna Hodges in their Formula Tech High Performance 2013 Holden VF SSV didn’t make it through the first stage today and were forced to retire with gearbox issues.

It’s down to serious business tomorrow. In Make Smoking History Targa West’s longest day, it’s important competitors perform well to set themselves up for a strong finish ahead of the finale on Sunday.

After an early start, competitors will head straight to Toodyay for eight stages before lunch then tackle the event’s longest stage at 20.30 kilometres Maryville Downs (run twice) in Chittering and finish the day with four stages in Bullsbrook. After 13 solid hours of rallying, competitors will have raced the clock on 14 stages over 127.47 competitive kilometres and driven a total of 450 kilometres.

Make Smoking History Targa West is on from 8th to 11th August. Competitors start at 30-second intervals, with the winner being the fastest over all 35 stages, a total of 260 competitive kilometres. The podium finish will be at Langley Park on Sunday along with the Celebration of Motorsport and Shannons Classics on the Park featuring over 600 cars, bikes and boats on display.

For full results and more information on Make Smoking History Targa West, visit www.targawest.com.au and keep up to date on Facebook https://www.facebook.com/targawest