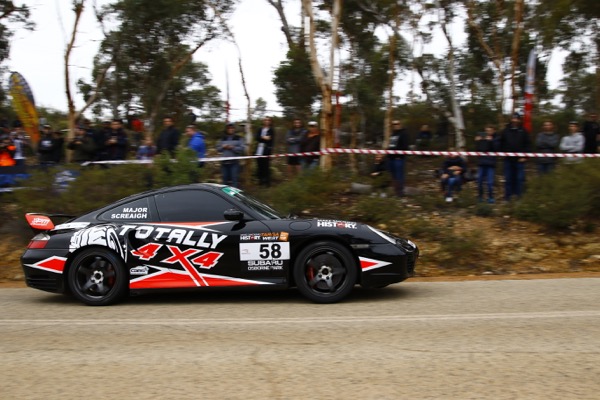 It was a long hard day in the office for rally teams during the third day of Make Smoking History Targa West with plenty of thrills and spills.

Starting early in the Toodyay mist, eight stages were run, then after the lunch service, competitors tackled the event’s longest stage at 20.30 kilometres Maryville Downs (run twice) in Chittering and finished the day with four stages in Bullsbrook. It was 13 hours of solid rallying on 14 stages over 127.47 competitive kilometres and a total distance of 450 kilometres. 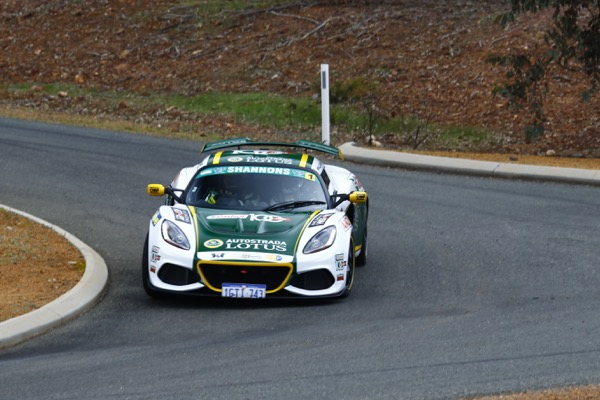 The fight intensified to fever pitch between Peter Major and co-driver Kim Screaigh, and Peter Rullo and co-driver Jimmy Marquet with both pushing to the limit all day, even finishing equal fastest on four stages including one of the 20.3-kilometre stages, Targa West’s longest.

Up until the final stage of the day, Stage 29, all stages were won by either Major or Rullo by the narrowest of margins, between 1 and 3 seconds, besides Stage 19 where Rullo was 7 seconds faster after Major stalled his Totally 4×4 / Tyres and More Mobile 2004 Porsche 996 Turbo.

Leading into the final stage of the day and after approximately 210 competitive kilometres across three days of racing, Major was ahead of Rullo by just 6 seconds. It was neck and neck.

On the final stage whilst pushing hard, Rullo, in his new 2019 Autostrada Lotus Exige Sport 410, locked the brakes coming into a roundabout and went straight over it, damaging three rims and dropping about 1:00 minute, yet he maintains second place overall. Rullo’s car was fixed within the hour, ready to race tomorrow.

“The Lotus has a switch that shuts off the fuel pump on a big impact which prevents the car from catching on fire. Lucky for us, one of the guys from Autostrada Lotus showed Jimmy where that switch was a couple of days ago, so we were able to pull over, switch it on and keep going to the end of the stage,” said Rullo of Gooseberry Hill.

“It’s been a great battle with Peter Major, and it ain’t over yet – I’m used to coming in from behind!”

Rullo, who won Make Smoking History Targa West last year, has finished on the podium three times and had more DNFs than he’d like to remember. This is his 11th Targa West campaign.

Meanwhile, Major, a five-time Targa West winner contesting his ninth event, said that he’s never been pushed this hard before.

“We’ve been driving to the limit all day, in fact, it’s the hardest we’ve been pushed ever. It’s a shame to see Peter Rullo’s misfortune, he’s done a mega job driving his new car and the battle has been really enjoyable,” Major said.

“Something was going to happen to one us to be honest, we’ve both been driving ten-tenths the whole day. It’s not the way we like to be in the lead, but it does give us some breathing room tomorrow,” said Major of Wembley.

Major / Screaigh finished on top of the leaderboard 1:07 mins ahead of Rullo / Marquet.

Will White and Matt Thompson in their Store Local 2006 Mitsubishi Lancer Evo 9 made up ground after sorting out boost issue overnight.

White / Thompson set a blistering pace today climbing three places from sixth at the end of yesterday to third today. They finished the day’s 14 stages with impressive results: second place twice, third place 11 times and once in fourth.

On the penultimate stage, they had an incident that resulted in damage to the front of the car, power steering damage and a hole in the radiator. White stopped at the end of the stage to check the damage and arrived at the last stage within his due time but the gap was to the previous car was too long, thus for safety reasons he was not permitted to start. He was allocated a derived time (an average) and will be on the start line tomorrow. He sits in third place overall, 2:11 minutes behind Rullo and 3:18 off the top pace.

“We were having a great day and the car was going really well, but these things happen, so what do you do? You fix it and get on with it,” said White of Dardanup.

“I’m really lucky that I have a great service crew and great people around me, without them I wouldn’t be able to rally.”

Finishing the day in fourth place 19 seconds behind White / Thompson was Sydney-sider John Ireland in his mega loud and totally tough 2017 Dodge Viper ACR Extreme 8.4 litre V10. Ireland has found his rhythm under the guidance of one of Australia’s best co-drivers and driver coaches, Steve Glenney.

Ireland / Glenney finished every stage in the top five today with the exception of Stage 27 where they finished 8th.

It was a stomach-clenching start for Mark Cates and co-driver Declan Stafford in Cates’ new car, Axis Hire 2017 Porsche 911 GT3 RS, almost having a big off, over correcting the steering a couple of times swerving erratically, that could have ended in disaster, and all captured on his in-car footage [watch clip here].

On Stage 23 in Toodyay, Cates said he momentarily stopped listening to his co-driver and completely overshot a corner, dropping about 20 seconds to finish the stage in 11th. He finished all other stages in the top seven.

“The new car is taking quite a lot of getting used to, it’s so fast. I must’ve overshot five corners today,” said Cates of Bunbury.

“We’ve finished the day all in one piece, and importantly, we finished the day. Pretty pleased with the way it’s all gone and I have to remind myself that I’ve only been doing this for 14 months,” said Cates, who first competed at Targa South West last year.

Cates / Stafford closed the day in fifth place overall, 57 seconds behind Ireland and 4:34 minutes behind the leader Major.

Rounding out the top five was current WA Rally Champion (gravel) John O’Dowd and co-driver Toni Feaver in his Truck Wholesale 2015 Skoda Fabia R5, a specialist gravel rally car that is used in Europe in the WRC2 competition.

An off-road excursion was had by Michael Brandt and Rachael Ferrante in their 2002 Mazda RX7 who ended up driving down a grass embankment and through a fence. The car and crew were okay and they finished the day 25th place overall.

The Solar Naturally 2001 Mitsubishi Lancer Evo 7 of Heuson Bak and Daryll Ooi limped across the finish with misfiring issues within the designated time frame and have been allocated a derived (average) time and will restart tomorrow. 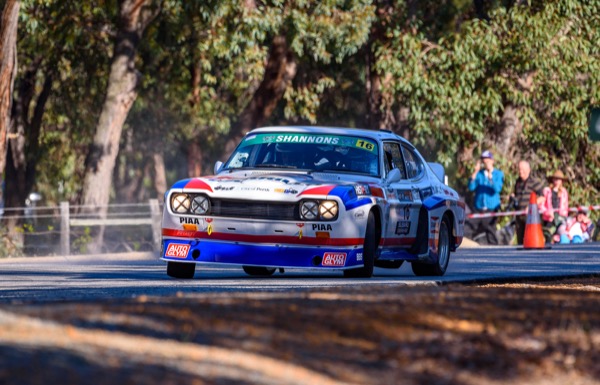 In the Competition Classic (pre 1986), the domination of Simon Gunson and co-driver Jurgen Lunsmann in GTI Process Controls 1971 Ford Capri Perana almost came to an end.

Before the last stage, Gunson / Lunsmann were 4:49 minutes ahead of nearest rivals Bruce Lake and co-driver Peter Hall in their 1971 Datsun 240Z, but suffered suspected carburettor issues with engine misfiring. They crossed the finish line within the time frame, thus allocated a derived time. Their substantial lead has meant that they have retained top spot overall ahead of the final day tomorrow.

Fighting Stewart / Zanotti for a podium place up until Stage 25, Maryville 2, was Greg Freeman and co-driver Wayne Turner in their GT Fabrication 1969 Chevrolet Camaro. Freeman explained that this time it really was the co-driver’s fault.

“Wayne was getting terrible motion sickness and was vomiting – try listening to pace note when someone’s got a rag in their mouth! It’s a shame, but these things happen. We have a new co-driver jumping in the hot seat tomorrow, Peter Davies who called notes for Mark Cates last year, so we’ll be able to restart and do Malaga and the city stages,” said Freeman from Australind.

The long night on Thursday night for the crew of Frank’s Classic Garage Racing has paid off. They finished an engine swap in the 1965 Ford Mustang at 3am to keep Paul Crute and Paul Gusterson in the rally and the duo has been posting some of their fastest times since. Despite being out of contention, they are enjoying the competition.

“With a new engine, we were able to rejoin as an invitational competitor, which means we can at least complete the rally. The car is going great and we’re having a ball,” Crute said. 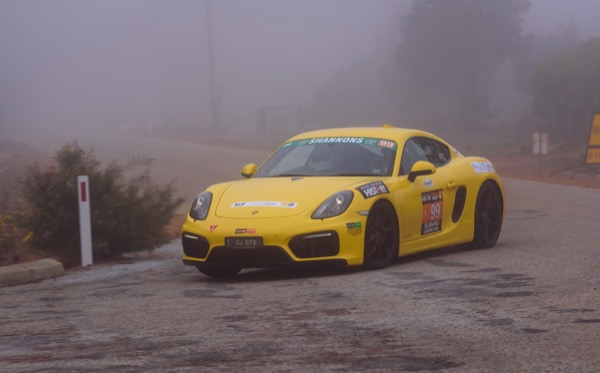 The battle is in full force in the limited speed non-roll caged category, Targa 130, with just 15 seconds between first and second.

Starting the day with a 9-second lead, husband and wife duo Jeffery and Catherine Foster in their 2016 Porsche Cayman 981 GTS finished the day on top of the leaderboard having won seven of the day’s 14 stages, finishing equal first in an additional three stages and placing second in all others.

Hot on their heels is Steve James and Nicholas Bentley in their 2009 Subaru WRX who won four stages, finished equal first with the Fosters on three stages and placed second in seven stages.

“Jeff and Cath in the Porsche have been a class above today,” conceded James.

“Nick and I drove the wheels off our WRX, hoping to gain some time back on the faster roads, but despite a few stage wins and some close times, we have lost a few more seconds and they will be hard to catch.

“Tomorrow’s stages have a lot of tight 90-degree corners, and we hope the 4WD traction of our Subaru might give us a chance to claw some lost time back. It’s going to be close!” said James of Piara Waters.

Rounding out the top three 4:59 minutes behind the Fosters is Daryl Sosa and co-driver Stirling Hamersley in their Grand Prom Medical 2018 BMW M4 Pure. 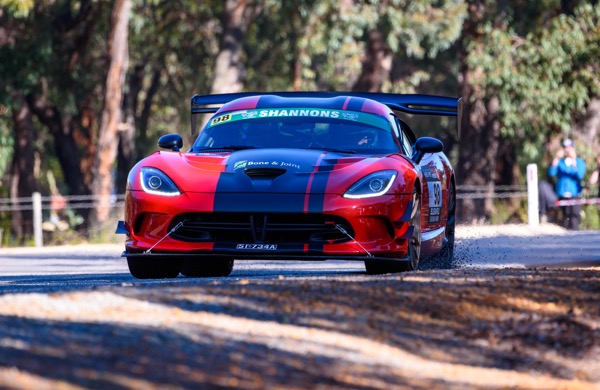 Tomorrow, it’s showtime. Make or break. The time to take risks and drive to the limit to make up vital time to finish on the podium, and that’s what competitors across all categories will be doing.

There are 35.61 competitive kilometres for drivers to contest, all of them with gutters and tight turns.

The short day of street style racing is all in the metropolitan area starting with three stages in Malaga from 8.45am, and then the final three sprint-style stages along Riverside Drive and the Perth Concert Hall carpark in the afternoon from 1pm.

The podium finish and champagne spray will be at Langley Park at 3.30pm along with the Celebration of Motorsport and Shannons Classics on the Park featuring over 600 cars, bikes and boats on display.

Make Smoking History Targa West is on from 8th to 11th August. Competitors start at 30-second intervals, with the winner being the fastest over 35 stages, a total of 260 competitive kilometres. 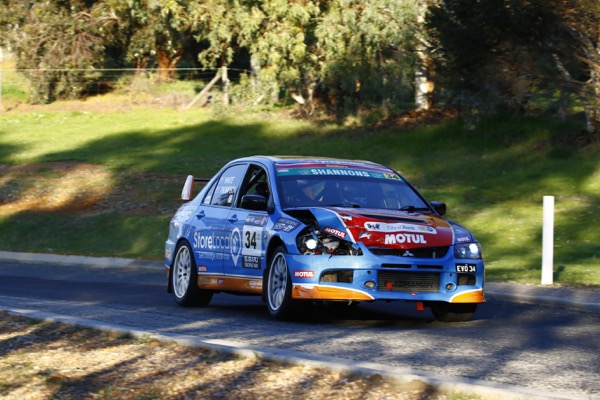