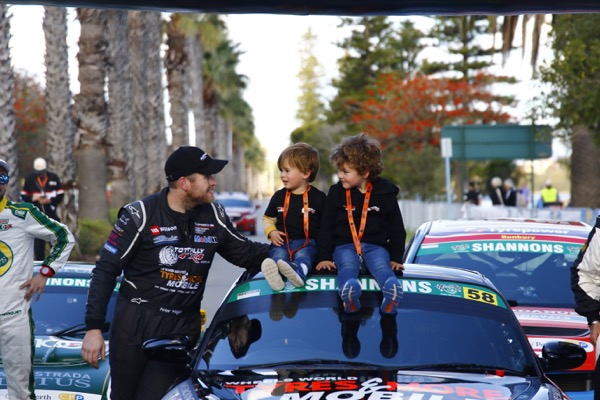 Bright blue skies on a warm sunny winter day with the faint whiff of high-octane fuel drew crowds in the thousands for the exciting motorsport action on the streets of Perth for the final day of the 15th Make Smoking History Targa West.

Today competitors tackled six short street stages totalling just over 35 competitive kilometres, three in Malaga in the morning and three along Riverside Drive in the City of Perth in the afternoon.

Competitors fighting to better their final placing had to push hard from the very start and those wanting to preserve had to exercise patience and minimise risks. In the end, it was celebrated at the Podium Finish with a traditional champagne spray on Riverside Drive.

The dare-devil drifters from DriftWest put on a jaw-dropping performance of sideways slides, skids and smoking tyres in between stage runs at Malaga, while the City of Perth hosted the Targa City Sprint with exotic, historic and classic cars giving spectators a full day of on-track and off-track motorsport entertainment.

At Langley Park, the city was abuzz with the Celebration of Motorsport mega-display and the Shannons Classics on the Park collection, together displaying 600 historic, modern, muscle and racing cars, bikes and boats. They were accompanied by real competition, roaring engines and screeching tyres of rally cars racing the clock.

“Our first priority is to run a safe event, the second is to run a five-star event and I think we’ve achieved that. The competition was exciting, we’ve had thousands of spectators across the four days and I’m proud of the team and the hundreds of volunteers who make it all happen,” Tapper said.

Make Smoking History Targa West is divided into Competition classes for Modern and Classic cars, the Targa 130 which is speed-limited and designed for showroom style or non-roll caged vehicles, and the 2Day Rallye comprises of just the weekend stages. Vehicles manufactured earlier than 1986 are classed as Classic and the Modern class for vehicles manufacture from 1986 onwards.

The 15th Make Smoking History Targa West was held in Perth and surrounds from Thursday 8 August to Sunday 11 August. Over four days, competitors raced the clock along 35 stages and a total of 260 competitive kilometres. 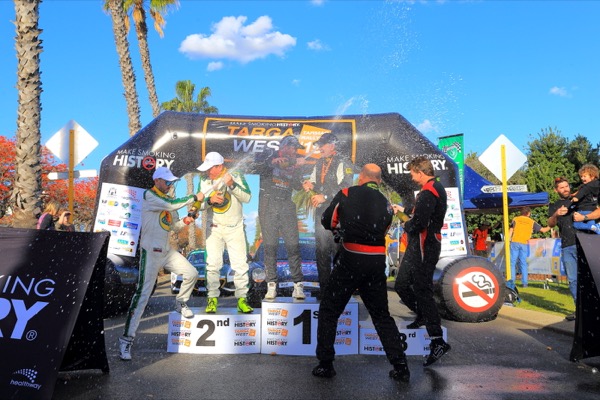 It was a close and intense battle between the two top teams, Peter Major and co-driver Kim Screaigh, and Peter Rullo and co-driver Jimmy Marquet, both pushing to the limit, driving ten-tenths for three solid days, with Major just holding the lead by a few seconds.

Yesterday, all stages were won by either Major / Screaigh in their Totally 4×4 / Tyres and More Mobile 2004 Porsche 996 Turbo or Rullo / Marquet in his new 2019 Autostrada Lotus Exige Sport 410. On the last stage of the rally’s longest day, Rullo suffered an unfortunate mishap that saw him drop about 1:00 minute in time when he locked brakes and went straight over a roundabout, costing him a chance at title contention. Up until that point, it was neck and neck.

Going into the finale today, Rullo pushed hard trying to claw back vital seconds, but Major proved to be too fast and finished 2:00 minutes ahead of Rullo to take his sixth Targa West title.

For Major’s car, the 2004 Porsche 996, this is its fourth consecutive win after Rullo leased it from Major last year, winning the title. Major skipped last year’s Targa West to concentrate on the Carrera Cup, but has previously won the title in 2017 and 2016 in the same car, as well as winning in 2015, 2013, and 2010. This was Major’s ninth Targa West.

In Targa West’s 15-year history, there have only been five winners: Peter Major, Peter Rullo, Steve Jones, Jim Richards and Ross Dunkerton who won the inaugural event in 2005.

Major paid tribute to past winners as he said a few words from the top step of the podium.

“It’s really special to be listed among such esteemed drivers who have won Targa West, and to win six, it just feels surreal,” said the 34-year-old father of two from Wembley.

“I was 25 when I won my first rally and things are bit different these days with two little kids – I’m trying to steer them towards tennis or cricket so I have some money in the bank when I retire!” quipped Major.

“Full credit to Peter Rullo, he pushed me harder than I’ve ever been pushed. I’d also like to thank the organisers and volunteers for another great rally.”

Rullo also gave credit to Major and said that it was a great battle up until the end of yesterday.

“It just wasn’t meant to be, but I’ve learnt a lot and learnt a great deal about the Lotus, we had no issues with it. I’ll be back next year,” said Rullo of Gooseberry Hill.

After setting a blistering pace yesterday putting in the hard yards, Will White and Matt Thompson in their Store Local 2006 Mitsubishi Lancer Evo 9 were able to take third place finishing 2:07 minutes behind Rullo / Marquet and 4:07 off the top pace.

Ireland said competing in Targa West was a bucket-list item and he was using the event as a learning experience sitting beside one of Australia’s best co-drivers and driver coaches, Steve Glenney.

“It’s been a good event, my favourite stages were probably Kalamunda,” said Ireland.

“I was pushing for fourth, but I over shot about five corners yesterday which lost us just under a minute,” said Cates of Bunbury.

“Targa West has been great practice for Cairns – I’m off to compete in Targa Barrier Reef in two weeks, I’ll know more about the new car from the start there!”

Also off to another rally in two weeks is current WA Rally Champion (gravel) John O’Dowd and co-driver Toni Feaver who finished sixth. They’ll be taking their Truck Wholesale 2015 Skoda Fabia R5, a specialist gravel rally car that is used in Europe in the WRC2 competition, to the Eureka Rally in Victoria to contest a round of the Australian Rally Championship.

“We’ve had a ball, it’s been a good week and the car ran faultlessly. I’m happy with our results,” said O’Dowd of Gooseberry Hill. 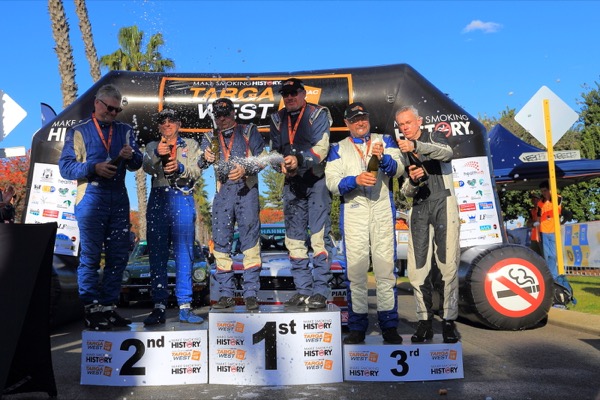 It was Gunson from go to whoa in the Competition Classic (pre 1986). Simon Gunson and co-driver Jurgen Lunsmann in their GTI Process Controls 1971 Ford Capri Perana set the pace early on Day 1, each day increasing their lead, so much so that when they lost about a minute and a half yesterday with distributor issues, they were able to maintain the lead. This is Gunson’s third Targa West win.

“It always feels great. It’s been a fun rally and we’ve taken it pretty casually. And I have to say that the crew is the best crew ever,” said Gunson of Bibra Lake.

Gunson / Lunsmann finished 4:01 minutes ahead of Bruce Lake and co-driver Peter Hall in their 1971 Datsun 240Z.

“It’s been a good few days in a good car with great organisation. We’re happy. Bullsbrook long was my favourite stage and Maryville is always enjoyable,” said Lake of West Perth.

Third on the podium was Kim Stewart and co-driver Frank Zanotti in their Franks’ Classic Garage Racing Team 1965 Ford Mustang. 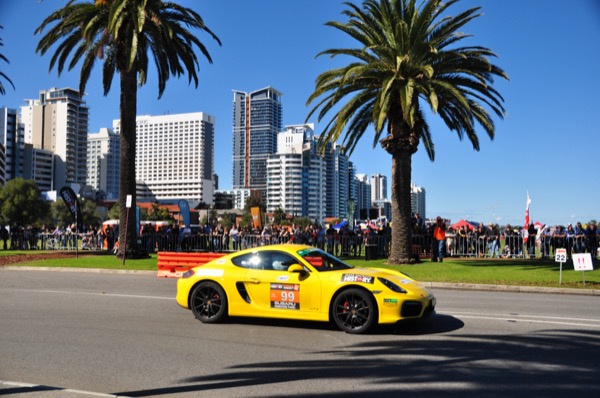 Leading into today with a 26-second lead was husband and wife duo Jeffery and Catherine Foster in their 2016 Porsche Cayman 981 GTS ahead of Steve James and Nicholas Bentley in their 2009 Subaru WRX.

With each stage today, the Fosters inched further ahead, securing a win by 52 seconds over James / Bentley.

“We’re delighted. It’s been a really enjoyable rally and we do this event first and foremost for the people, but the battle with James has been fun,” said Jeff Foster of Bicton.

Rounding out the top three 5:42 minutes behind the top pace was Daryl Sosa and co-driver Stirling Hamersley in their Grand Prom Medical 2018 BMW M4 Pure. 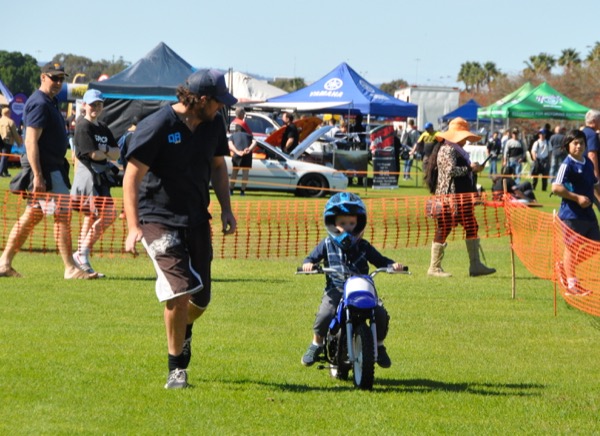 The 2Day Rallye is designed for competitors who just want to do the weekend stages.

Three competitors started this category and two finished, both ending up on the podium by default.

Andy van Kann and co-driver Megan Logue were fastest in their NOROCK 2007 Honda Civic Type R by a mile.

“It’s never easy. We had some brake problems but got through and obviously, we’re very pleased with the result. The two-day format suits me perfectly, I get all the rallying I need in those two days,” said van Kann of Dunsborough.

Full results can be found at here and photos and videos on Facebook.