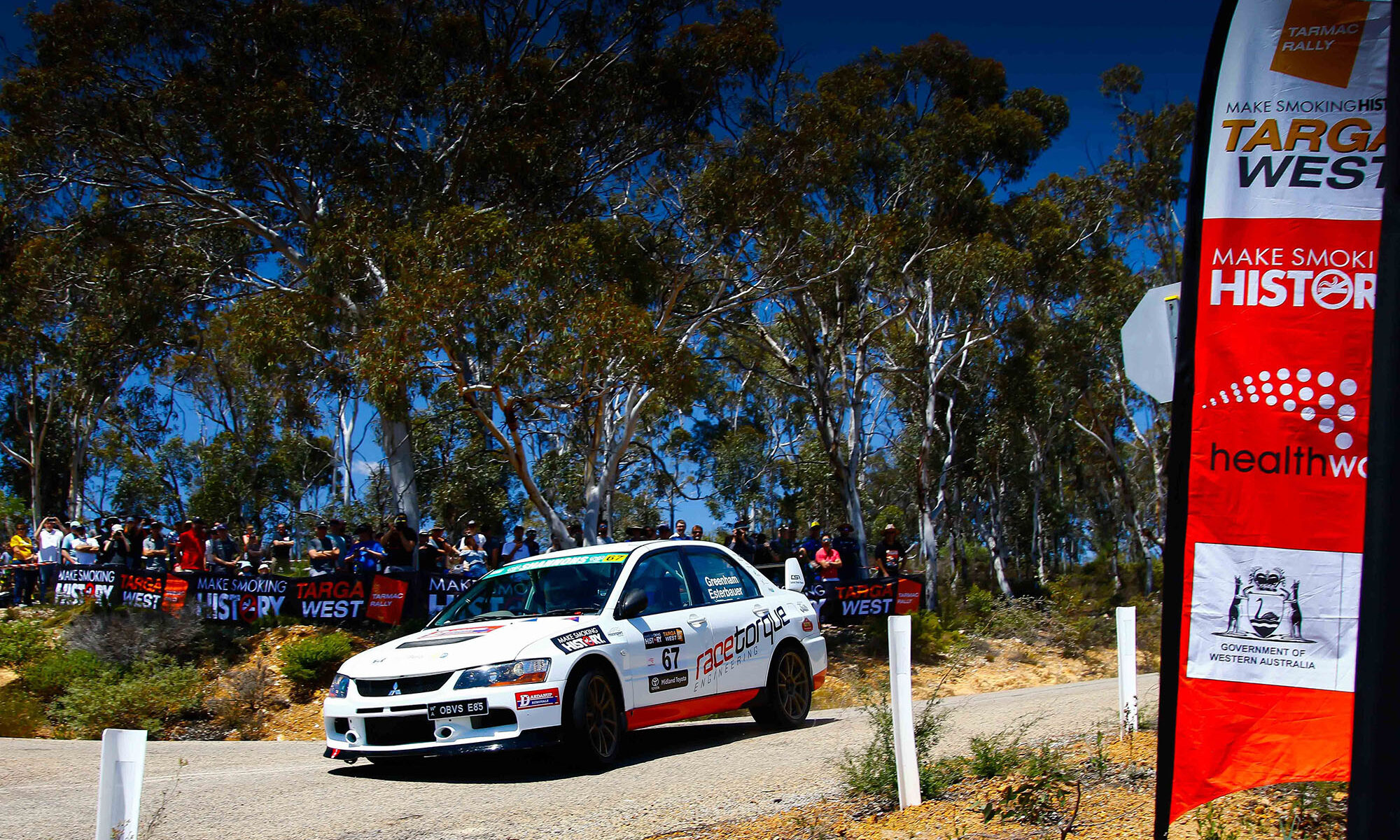 The marathon Day 3 was hot, reaching temperatures of 31 degrees, challenging man and machine at the 16th Make Smoking History Targa West in Toodyay, Chittering and Bullsbrook, north east of Perth.

Today was Leg 2, the longest and toughest day of Make Smoking History Targa West covering 461 kilometres, 14 stages and 129.2 competitive kilometres which includes the two longest stages of the rally, Maryville Downs at 19.68 kilometres, run twice. The final stage of the day, SS30 was cancelled due to running over time.

In its 16-year history, Make Smoking History Targa West has only crowned five champions in the Competition Modern category and this year it’s likely to be someone new.

The big news of the day was the retirement of Peter Rullo and Jimmy Marquet who had to stop after SS23 when their 2019 SSC Lotus Exige Targa GT overheated.  Some surface gravel on a newly resealed section of road flicked up under the car, tearing the belt attached to the water pump, which cools the car.

They managed to replace the torn belt but didn’t make it to time control within the allocated 30-minutes to continue their rally without penalty. Prior to that, Rullo / Marquet were faultless, winning the day’s first five stages and inching their lead by a few seconds each stage.

Rullo said that the team will assess the car over night before deciding if they will rejoin tomorrow.

The departure of Rullo / Marquet catapults Mark Greenham and Steph Esterbauer in their 2006 Mitsubishi Lancer Evo 9 to the top of the standings with a healthy lead of 3:28 minutes ahead of second place, husband and wife team Jeffery and Catherine Foster in their 2019 Porsche GT3 RS.

Just 11 seconds behind Foster / Foster is Will White and Matt Thompson in their 2006 Mitsubishi Lancer Evo 9.

Greenham said it was a strange feeling to be in the lead.

“Before it was push, push, push, and now we’re like ‘Oh God, what’s that noise’ – we have the lead to look after now,” said Greenham.

“Going into tomorrow, we’ll be looking after our tyres and the car. We plan to keep a good pace, keep out of people’s way and keep away from any kerbs. There’s still another day to go and anything can happen, but yes, it’s exciting.”

Going into the finalé in second place, Jeffery Foster said he plans to minimise mistakes and push when he can.

“Anything can happen in Malaga, but we’ll drive to our strengths, remain diligent, get the calls right and try to keep mistakes to a minimum. The car has performed as expected, and now it’s a mental game,” Foster said. 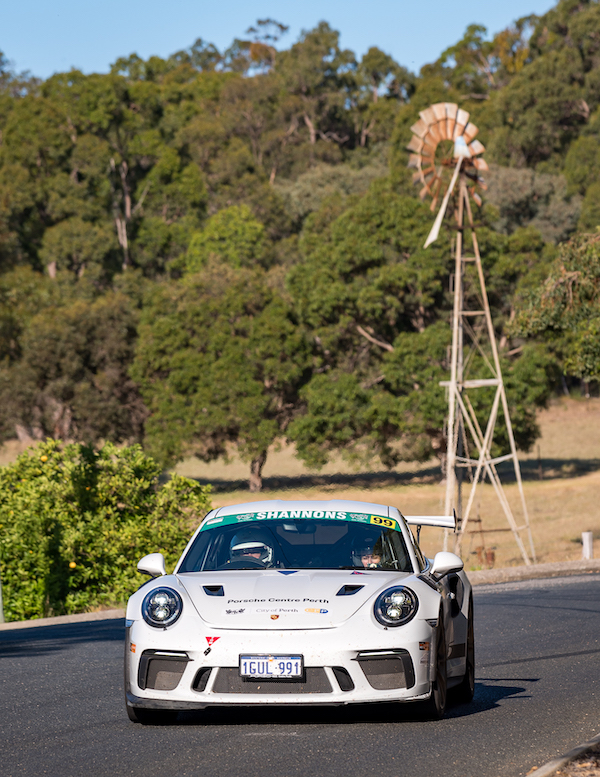 Foster may need to push more than he plans if he wants to hold second place, Will White is on the hunt.

“Definitely, one hundred per cent I’m going to push and go for second place or crash trying. It wouldn’t be a rally otherwise!” said White.

“We’ve been saving new tyres for Sunday – I’ve got new medium tyres on the front and the best of the tyres will go on the back. In the past, we’ve been the quickest on the city stages, and we’ll be giving it a good crack tomorrow.

“The boys from Tokyo Motorsport have been on the tools ensuring the car is trouble free. Bring it on.”

Dropping down the leaderboard today to fourth place due to tyre degradation was Brett Morse and Rodney Ng in their 2019 BMW M2 Competition.

With a new clutch fitted overnight, John O’Dowd and Toni Feaver were again posting competitive times to finish the day in seventh place in their leased 2004 Porsche 996 Turbo, a car that has previously won Targa West four times. The new clutch incurred a 2.00-minute time penalty for removing the car from Parc Ferme.

Arriving at the second Toodyay service park on a tilt tray was the 2008 Audi R8 of Peter Burgess and Terry Childs.

“We were full power, went hard on the brakes for a virtual chicane, heard a big clunk, kept going and then had no steering. It’s the lower ball joint, we can replace it and carry on,” said Burgess, a Targa West rookie.

“My company Forch, which makes garage consumables, sponsored a few competitors in the past and I thought I should have a go myself. I did one rally sprint in the lead up a few months ago, and here I am, and loving it.”

Invitational competitors and Targa West rookies Garry Povah and Steve Armour were forced to retire with differential issues at the end of SS26. While rookies, the team is very experienced and awarded in off road racing, their 2011 Holden Colorado won the Australasian Safari in 2010 (driven by Craig Lowndes). They may restart tomorrow.

In the Competition Classic (pre 1986), there’s no stopping Simon Gunson and rookie co-driver Peter Morley who again, for the third straight day, won all stages in their 1971 Ford Capri Perana, to increase their lead to 4:43 minutes. Gunson / Morley have won 29 stages straight.

Gunson was smiling as usual, seemingly non-fazed by his achievements.

“It’s good to be in the lead, but I’m also looking how we compare to Modern category,” Gunson said.

“Everything with the car is great except the speed sensor which isn’t showing up on the dash, I suspect a stone hit it in one of the morning stages, but we have RallySafe, so it’s all fine.” 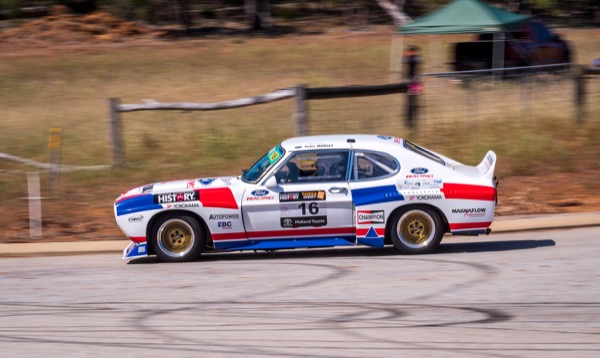 Finishing the day in second place was Tim Wolfe and Scott Beckwith in a 1974 Porsche 911 Carrera RS about two and half minutes behind them in third today were cousins Nathan Ellement and Keven Ellement in their 1985 Chevrolet Corvette C4.

Nathan Ellement said that they were ticking along nicely in their third attempt at Targa West.

“All eight cylinders are working, we stayed on the black stuff, we’re still going and we’re having a ball,” said Nathan.

“We plan to maintain our position and keep going. Malaga will be interesting, that’s where we hit a water barrier last year – the left-hand-drive can be tricky to judge.”

Kim Stewart and Frank Zanotti in their 1965 Ford Mustang are 35 seconds behind Ellement / Ellement in fourth place.

Greg Freeman and Jeff Sadler arrived in the Toodyay Service Park with their Chevrolet Camaro on tilt tray after overshooting a corner and hitting a tree on the left side on SS20. Both uninjured, they were able to restart the rally albeit with a few new dents.

Not in contention but a crowd favourite, the 1967 Mini of mother and son Cindy and rookie co-driver Ewan Jones is still racing despite a list of issues that include clutch, distributor, suspension and fuel. Cindy said that they are having a ball and her favourite thing was taking a good corner.

Rookies Ben Pang and co-driver Brandon Chin in their 1999 Honda Civic have increased their lead to 13:45 minutes ahead of Nick Rahimtulla and Lisa White in their 1973 Alfa Romeo 2000 GTV 105.

The Targa 165 category restricts drivers to 165 kilometres per hour, but that doesn’t seem to wipe the smile from Pang’s face.

Originally from Borneo, Pang said that while this is his first rally, he’s done a lot of circuit racing.

“Circuit is different, but I prefer the open road now I’ve tried it,” Pang said.

“To drive on the closed streets really fast is a really fun experience. I’m learning to trust the co-driver, I need him and I need to be patient with him too. We are having a lot of fun.”

In fourth place in the Targa 165 is the Mayor for the City of Swan, Kevin Bailey and his co-driver Eric Purvis both rookies to Targa West but they did compete in the one-day Targa South West in August.

“I was an overqualified spectator and I thought what am I waiting for, why not give it a go, and here I am. I would love to see more rallying in the City of Swan, this is just a fantastic event,” Bailey said.

You won’t hear them coming, and if you blink you might miss seeing them. The eerily silent but speedy electric Telsa 3 Performance+ car of Jurgen and Helen Lunssman have increased their overall lead today in the Targa 130 category by 7.04 minutes ahead of David and Anna Hodges in their 2013 Holden VF SSV. The Targa 130 category restricts drivers to 130 kilometres per hour.

The hot weather has the reverse effect on the electric car.

“The battery actually likes the heat, so it works in our favour. The only downside is that it uses slightly more charge keeping the car cool,” Jurgen said.

The 2 Day Rallye is a shortened version of Make Smoking History Targa West for competitors who can only commit to the weekend, and they race the same stages as the other competitors.

Tomorrow, the Finalé, is all about taking risks and driving to the limit if an advancement is in reach or preserving position if it isn’t.

There are six stages and 35.61 competitive kilometres for drivers to contest, all of them with kerbs, gutters and tight turns.

The short day of street style racing starts with three stages in Malaga from 8.40am, including jaw-dropping demonstrations of Drift Cars by D1WA. The final three sprint-style stages take place along picturesque Riverside Drive and the Perth Concert Hall carpark from 1pm.

The podium finish and champagne spray will be under the archway on Riverside Drive 3.15pm.

From 10am Sunday, not to be missed is the Shannons Classics on the Swan, a huge collection of stunning classics along Riverside Drive, the Celebration of Motorsport on Langley Park along with the All Ford Day that collectively see more than 1,000 cars, bikes and boats on display.

Remember to be sun smart, the forecast for Sunday is a hot 34 degrees.

For more information, visit www.targawest.com.au and keep up to date on Facebook https://www.facebook.com/targawest