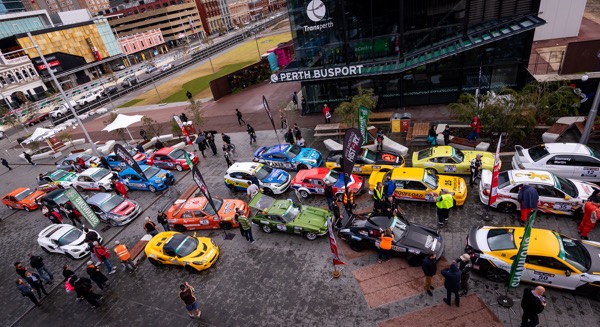 Cars ready for Ceremonial Start in Yagan Square in the City of Perth. Credit: CMR Photographic

Despite intermittent rain, the forty competitors contesting the full four-day rally were flagged off by City of Perth Commissioner Andrew Hammond and then made their way to the event’s first four stages at Whiteman Park; Stages 1 and 2 were 3.76 kilometres and Stages 3 and 4 were 3.66 kilometres long. Times for the first stage, classed as a warm-up, were not included in results. Stages 2 and 3 were run without incident, while Stage 4 was downgraded due to a number of hazards including rain, hail and road conditions. Organisers have allocated a derived time to competitors for Stage 4. 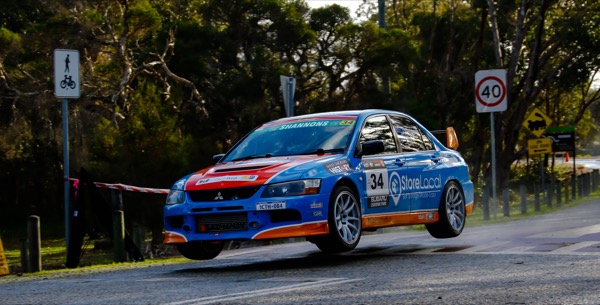 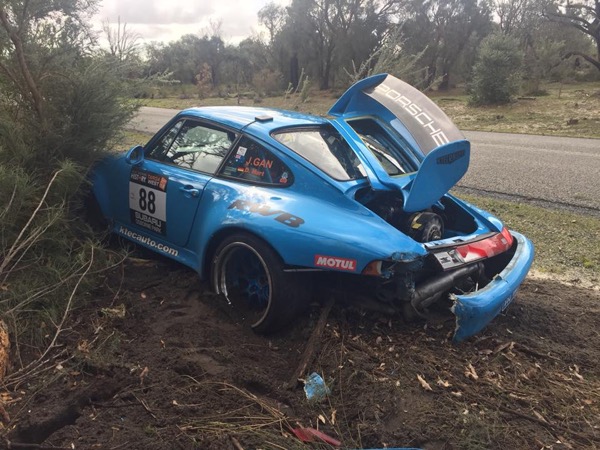 Leading the pack from the get-go was Will White and co-driver Matt Thompson in a revamped 2006 Mitsubishi Lancer Evo 9.

“I’m feeling really comfortable in the car and it’s nice to have a good little buffer going into Day Two. We have done a fair bit of work to the car putting in a new drive train and a new turbo – the new set up is really good. We’ve got as good as chance as any to finish on the top step, so let’s see. We’ll get a good night’s sleep and crack on tomorrow.”

Hot on his heels finishing the day in second place just 10-seconds behind the leader despite two offs, is Mark Greenham and co-driver Stephanie Esterbuer in their 2006 Mitsubishi Evo 9.

“It was an interesting day and we finished reasonably well despite hitting the speed bump too hard and going around the roundabout the long way on Stage 2, then we ended up down an embankment on Stage 3, so finishing the day in second place is a good result,” Greenham said. “But there’s really only seconds in it.”

Greenham, who won Targa South West in May, is aiming for a win in this event.

“First and foremost the aim is to the get the car home safely and in one piece. It’s pretty competitive at the front of the field, so we’ll have to see how we go. I really enjoy the variety of the roads in tarmac rallying – it can be daunting with lots of unknowns which can be a little scary, but that’s what I like about it,” said Greenham, 40, of High Wycombe.

Trailing by just two seconds to round out the top three in equal third place is John O’Dowd and reigning Targa West champion co-driver Ben Searcy in a Subaru 2008 WRX STI, sharing third place with Brendan Templeman and co-driver Peter Howlett in a 2003 Mitsubishi Lancer Evo 8.

It was an unlucky day for Justin Gan and co-driver David Hart who crashed their 1978 Porsche 911SC; no injuries were sustained and he is expected to restart the rally tomorrow.

Winning the day’s timed stages in the Competition Classic category was Mark Dobson and co-driver Nigel Jones in a 1975 Triumph TR7 V8.

“This year we pretty much rebuilt the car, so while it’s the same car I’ve always competed in, it feels like a new car,” said the Warnbro resident.

“The car is handling very well after the rebuild and we’re very happy with the way it’s going. It’s early days so we’ll see how we go.”

Co-driver Nigel Jones is the only competitor in this year’s line up who has competed in every Targa West event since its inception 14 years ago.

Dobson / Jones lead by 8 seconds over Kirk Beardwood and Nives McGavin in a 1985 BMW E30.

Finishing the day in third place, 2 seconds behind Beardwood/McGavin is Bruce Lake and Peter Hall in a 1971 Datsun 240z.

In fourth place just 3 seconds behind Lake/Hall is 12-time Targa West competitor Simon Lingford with his co-driver wife Susannah Lingford making a return after a two-year break in their 1973 Datsun 240Z.

In this car, Lingford, was the fastest privateer in the London to Sydney Marathon in 2000. 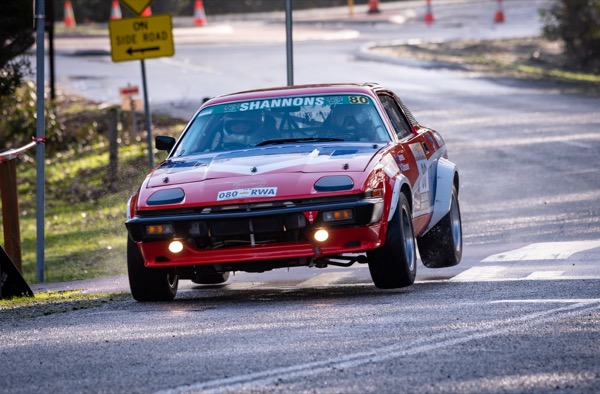 Finishing the stages with the quickest time in the Challenge category were rookies Michael Brandt and his girlfriend co-driver Rachael Ferrante in their 2002 Mazda RX7.

They were leading by 2:12 minutes when the pair suffered a mechanical just before time control on Stage 3 but managed to finish the stage.

“We’ve had to take the car to make some repairs, so we’ll have to cop a penalty for that, but it’s worth it to stay in the rally,” Brandt said.

“We were struggling a little with grip because it was hard to read conditions with wet and dry patches on the short stage. The car was flying until we had an issue, so we’re still feeling positive.”

The duo has been given a penalty for failing to check into the final time control at Parc Fermé, putting them at the bottom of the leaderboard.

Brandt’s penalty was favourable for the event’s only electric car competitor, husband and wife team Jurgen and Helen Lunsmann in a 2011 Tesla Roadster who finished the day fastest.

Jurgen Lunsmann said at the Ceremonial Start that normalising electric cars in motorsport events is one of his goals.

Finishing the day in second place 11 seconds behind Lunsmann/Lunsmann is David Hodges and co-driver Anna Hodges in their 2013 Holden VF SSV.

Rounding out the top three was the 2017 Lotus Elise piloted by Nikola Mitic and co-driver Geoff Duckworth.

Tomorrow sees competitors race the clock along six stages, a total of 65 competitive kilometres, around Kalamunda including the infamous Zig Zag stage from 11.25am until 2.00pm. Railway Road in Kalamunda will become the service park for the Make Smoking History Targa West tomorrow and spectators are welcome.

Tomorrow night the Show n’ Shine will take place on James and Lake Streets in Northbridge, bringing some motorsport colour to Perth’s nightspot neighbourhood from 6.00pm until 9.00pm.