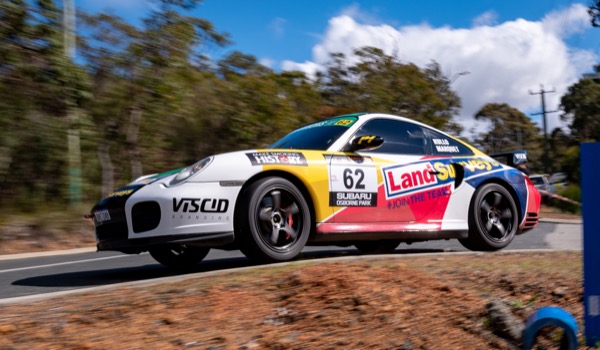 The 14th edition of WA’s premier tarmac rally saw competitors race the clock along six stages, a total of 65 competitive kilometres, around Kalamunda including the infamous Zig Zag stage. In town, Kalamunda’s Railway Road was transformed as it hosted two services of the day with the third and final service held in Forrestfield.

Competitors then headed into Northbridge, Perth’s nightspot precinct, for the free Show n’ Shine on James and Lake Streets, bringing some motorsport colour to the inner city streets from 6.00pm until 9.00pm.

Note: results are provisional at the time of writing 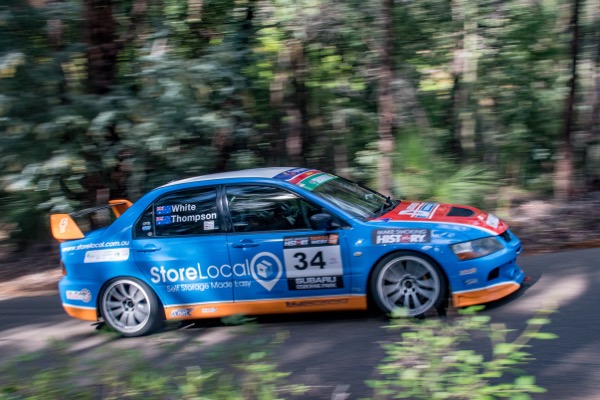 It was a day of cat and mouse between Will White and co-driver Matt Thompson in their 2006 Mitsubishi Lancer Evo 9 against podium contenders Peter Rullo and James Marquet in a Porsche 996 Turbo, last year’s winning car at Targa West (that was driven by Peter Major / Ben Searcy).

White/Thompson were fastest on the second Zig Zag stage, SS9, but ran into problems when they blew an intercooler pipe in the last stage of the Leg, SS10, which saw them lose 50 seconds and drop from second to third place in the overall rankings, trailing Rullo by 1:12 minutes. The duo also copped several penalties for breaching restricted speed zones. Regardless, White was all smiles.

“It’s all fixed now, so we’re ready to go tomorrow – and it’s still early days and as we know, it isn’t over until it’s over and anything can happen,” White from Dardanup said.

“We’re cruising, pushing but pushing calmly – when you push too hard and get too excited you end up doing silly things like cop speed penalties. I’m loving the battle with Rullo, it’s been really fun,” White said.

The Porsche has taken some getting use to according to Rullo, who only drove it for the first time on Monday.

“The biggest difference is that it’s 300 kilograms lighter than my old Nissan GTR, so it’s very nimble and changes direction quickly, but as I found out on the Zig Zag stages today, it’s better in the fast flowing stages than the tight twisty ones,” Rullo said.

Rullo reported that it was almost impossible to get into first gear and that he needed to slow the Porsche down to slower than walking pace to take the tight hairpins on SS7 and SS9, the Zig Zag.

“I’m glad that’s the last of the slow stages, the flowing Stage 8 was really good, I enjoyed that,” Rullo said.

“This is what makes Targa so great, each car has different strengths and weaknesses – my old GTR being heavier had great aerodynamics in the fast sections, whereas the Evos are light and are able to handbrake-turn quickly.”

Driving a 2003 Mitsubishi Evo 8 is Brendan Templeman and Peter Howlett who finished the day and Leg 1 in second place overall, 1:03 minutes behind Rullo/Marquet.

John O’Dowd and co-driver Ben Searcy had a solid day in their 2008 Subaru WRX STI to finish in fourth place, trailing Templeman/Howlett by just 2 seconds.

Rounding out the top five in the Competition Modern category just 2 seconds behind O’Dowd/Searcy and 1:16 minutes from the leaders was David Heaton and co-driver Caleb Ash in their 2016 Ford Focus RS.

“We were a lot faster than we expected in Kalamunda, so we’re very happy. Yesterday we were very cautious in the wet conditions and today we were hoping not to be too far off the pace,” Heaton said.

“Tomorrow is when we plan to make our move. This car is made for Toodyay and we want to beat Bill Stagoll – we’ve been dicing with Bill the last three years and have this friendly rivalry – so now it’s on!” Heaton said.

“It takes me a while to warm up, so I took it pretty casual in the first stage today, it was a bit slippery and I was trying to get the speed zones correct. I didn’t do that too well and ended up with some slower times in the first couple of runs, but then things started to flow a lot better. The car is going well, brilliantly actually,” Stagoll said.

After a great start yesterday finishing in second place overall, Mark Greenham and co-driver Stephanie Esterbuer had a frustrating day in their 2006 Mitsubishi Evo 9 after blowing an exhaust hose and running without turbo. While Greenham was disappointed, they did well to finish the day in seventh place overall 1:51 minutes behind leaders Rullo/Marquet.

In other news, rookies Mark Cates and co-driver Pete Davies who purchased Peter Rullo’s Nissan GTR that came second in Targa West last year, ripped off the the passenger door when it was opened by the co-driver just as the driver reversed alongside a tree. Nothing some gaffer tape can’t fix and the pair are still talking and importantly, still smiling.

Invitational competitors Denver Parker and Lachlan Beresford in their 1993 Nissan Skyline R33 suffered a broken drive shaft and missed the last stage. They are expected to make a return tomorrow. The Australian duo are sporting American flags besides their names, and when quizzed, Parker said that several years ago, an unnamed Perth television reporter inaccurately reported him as being American (his name is Denver) and it’s been a running joke ever since… 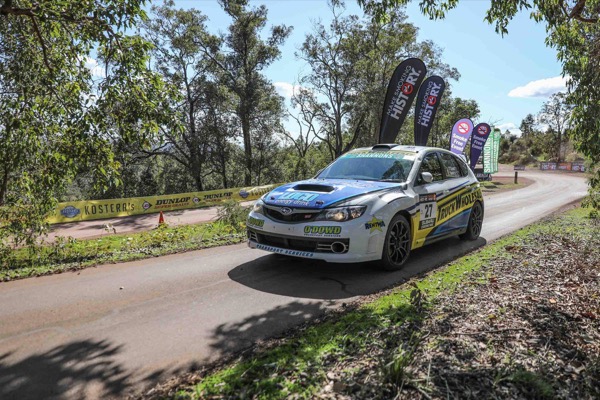 Dominating Day 2 in the Competition Classic category was once again Mark Dobson and co-driver Nigel Jones in a 1975 Triumph TR7 V8, winning five of the day’s six stages.

The duo looked far from relaxed at Kalamunda’s second service, leaping from the car and quickly getting to work with their crew during the short 20-minute timeframe allowed for repairs.

“We’ve got a fuel issue and we have dropped some time – so we haven’t been able to push. It’s fixable, the team are onto it now,” Dobson said.

Dobson/Jones finished the day 59 seconds ahead of 12-time Targa veteran Simon Lingford and wife Susannah in their 1973 Datsun 240Z, who overshot a corner in the first stage today.

“We’re lucky there was a big run off area!” Lingford said. “We’re loving it and have a ball. The roads are fantastic – I really like the Kalamunda and Mundaring stages because it’s very fast so you need to be very precise. The whole event is a credit to the rally organisers.”

Trailing by 7 seconds and finishing Leg 1 in third place overall was Kirk Beardwood and co-driver Nives McGavin in their 1985 BWM E30.

In other news, Justin Gan’s 1978 Porsche 911SC was back after a crash yesterday. His crew worked on the car for seven hours overnight and according to Gan, it’s running perfectly. The back end shifted to one side but the motor wasn’t damaged and everything mechanical is straight despite body parts seemingly being held together with gaffer tape. Gan and co-driver David Hart are currently in 11th overall.

Finishing the stages with the quickest time in the Challenge category was young-gun Nick Mitic and co-driver Geoff Duckworth in their 2017 Lotus Elise impressively winning five the day’s six stages.

At just 18 years of age, the first-year university student is a P-plate road driver yet has 11 years karting and circuit racing experience including competing in Formula Fords. Last year, Mitic finished second in the 2 Day Rallye at Targa West.

“Our goal this year was to do the full Targa West event and I’m seriously loving it. It’s one of the coolest things I’ve been able to do in a car ever, and even though there’s a speed limit of 130km/h, it’s much more exciting than circuit racing,” said the ECU Criminology and Justice student from Sorrento.

“The car is unbelievable, it’s a stock standard car but it hasn’t skipped a beat, and it’s one of the best cars I’ve ever driven. I can’t fault the car and I really appreciate the support from Lotus and Autostrada.”

While Mitic has his eye on the top step of the podium, he said Targa West was more about the promotion of the car and Autostrada.

“Tomorrow’s stages are better suited to the high-powered cars so I’m going to use this lead and keep it at a safe level….and probably push harder on Sunday.”

Mitic/Duckworth finished the first Leg 1:24 minutes faster than the event’s only electric car competitor, husband and wife team Jurgen and Helen Lunsmann in a 2011 Tesla Roadster.

Jurgen Lunsmann said he was really enjoying getting to know the car.

“We’re having an absolute ball. It’s great to learn about the quirks of the new type of technology in the Tesla such as battery, motor and electronic temperatures. Just like petrol cars that use more fuel on stages than on liaison, electric cars use more power.

“Our goal is to be competitive and we’re happy to be mid-field, putting on a bit of a show but also preserving the car.

“Helen is having a ball but also finding it a challenge to time her calls – there’s no engine noise so she can’t hear the engine gearing up or down, slowing or speeding up.

“Tomorrow is going to be a bit challenge given the length of the day – the Tesla has the same range as an Evo but it doesn’t have the ability to refuel at same rates – well not this year.”

Lunsmann said this year was a data collection exercise for a bigger assault next year.

“I’m enjoying the camaraderie and what’s really nice is that we’re getting a good response from the crowds – there have always been the jibes and extension cord jokes, which of course there still are, but the positivity is great.”

Finishing in third overall were rookies Michael Brandt and his girlfriend co-driver Rachael Ferrante in their 2002 Mazda RX7.

Tomorrow (Saturday) competitors head to pretty Toodyay, Lower Chittering and Bullsbrook to the east of Perth in the longest day of the Make Smoking History Targa West. Leg 2 (Day 3) comprises of 14 stages, 123 competitive kilometres and total distance of 445 kilometres. Toodyay’s Charcoal Lane will host three minor services and the major service at the end of Leg 2 will be in Bullsbrook on Corvette Road. It’s free to spectate and more information including spectator points and live results can be found at www.targawest.com.au