A couple of years back, I set out to develop a reliable, cost effective Targa West car with the primary objective to enjoy thrilling tarmac driving in a “real” rally car. I had no intention to try to get into the top half of the field simply because of the cost… and realistically I don’t have the skill anyway!!

I started with a 2007 Honda Type R which had been in the family since new . Naturally aspirated 2 litre. Market value around $15,000. Yes, I have spent money on it (not a lot though) to make it a really fun car. BUT… it still fully complies with Targa Australia Standard Specification (Early Modern). It is also fully GT2 compliant, but the VIN is 5 months too old for GT2 … so make sure you get a 2008 VIN!! 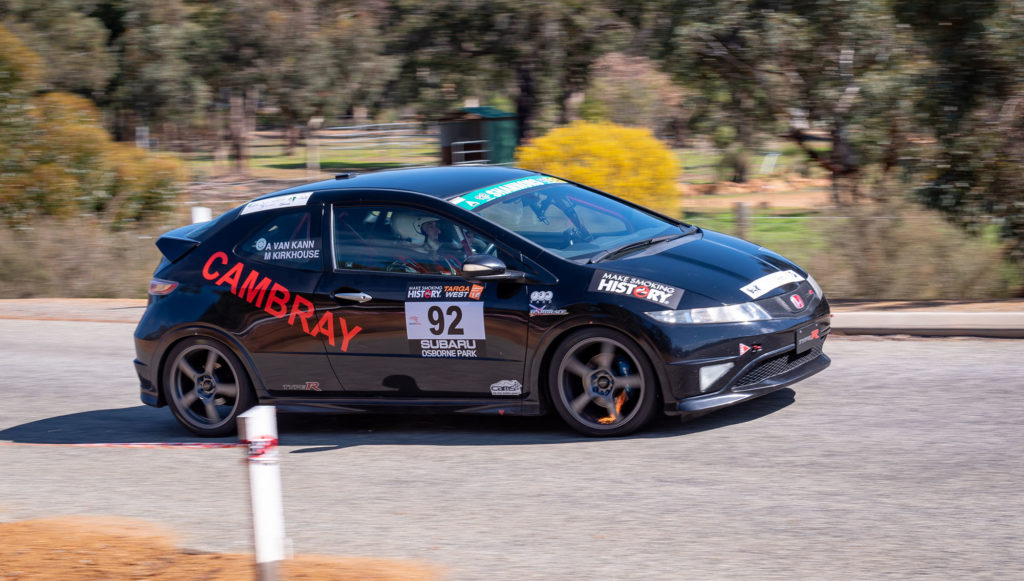 So.. how much fun is this car? Lots. But lets first be realistic… tarmac rallying is ALL ABOUT Power to Weight Ratio (PWR). The BIGGER, the BETTER!! Yes, handling, brakes, transmission, aerodynamics are also all very important… but make no mistake… it’s all about PWR!! And if you study the 2018 Targa West Entry list (all cars Modern, Classic, Targa Tour, Targa 130, Targa 165, Targa 200) then the Honda has the worst PWR in the field… with the possible exception of the EV’s. In fact nearly all the other cars have TWICE or more the PWR of the Honda. So, how did we go with such a massive performance disadvantage? We won the Best Fun for Dollar Trophy!! Actually, we did OK! Once you get your head around being outgunned on PWR you then start to focus on two other things… i) how well are we going as a crew ii) are there any cars we can have a “battle” with at the back of the field.

Exciting? In our case we entered the 2 Day Targa 165. Ironically, with our PWR, we had very little advantage over the Targa 130 cars… simply because the Honda rarely gets over 130 on Saturday and only once momentarily on Sunday. In fact over the two days we only got to 165 a few times and then only momentarily. Turns out that our stage times were very close to another 2 Day car… the 981GTS and not far off the pace of the fire breathing Monaro V2. By the end of Saturday we had established a 62 second lead on the 981. On Sunday, by the end of the 3 Malaga stages, the Porsche had clawed back all our lead. Malaga is all about “point to point” grunt… and the little Honda suffers badly under those circumstances! Exciting?

We started the final City run with a one second lead on the 981. And we hung on to take 2nd in the 2WD. OK.. so this is just a private battle at the back for second place in the 2 Day… but I reckon we had as much fun and excitement as Peter and Will battling for 1st Outright!! By the way…. Our average speed over the two days of stages was 101 km/h despite being restricted to 165 max and rarely going above 130,

Where to from here? Over the coming weeks I will follow up with my thoughts on the big future of Targa 130 and Targa 165. I’ll also do a story on set up budget, operating budget and perhaps one on my recommendation of car and category for the Best Fun for Dollar Trophy.