A beautiful sunny day followed a foggy start in Toodyay, about 90 kilometres east of Perth, where competitors tackled stages in the pretty countryside in the longest day of the four-day Make Smoking History Targa West tarmac rally, which concludes tomorrow.

Close battles ensued as competitors got down to business to set themselves up for a good finish tomorrow.
Leg 2 (Day 3) consisted of 14 stages, 123 competitive kilometres and total distance of 445 kilometres. Toodyay’s Charcoal Lane hosted three minor services and the major service at the end of Leg 2 was in Bullsbrook.

Note: all results are provisional at the time of writing. 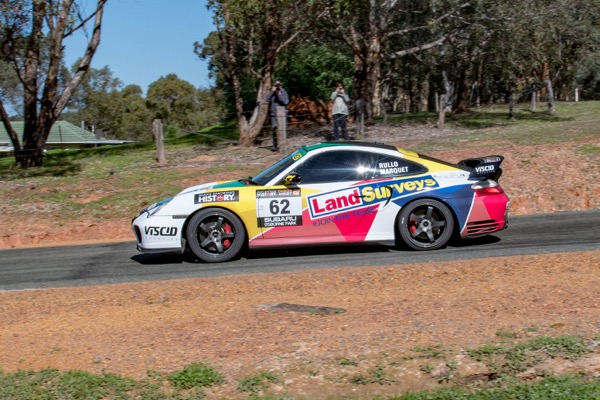 There’s a fierce battle going on in the Competition Modern between current leaders Peter Rullo and James Marquet in a Porsche 996 Turbo and Will White and co-driver Matt Thompson in their 2006 Mitsubishi Lancer Evo 9, who between them, won every stage of the day.

After losing 50 vital seconds on yesterday’s last stage due to a minor mechanical to finish Leg 1 in third place, White/Thompson came out guns blazing today, winning 7 of the day’s 14 stages. They came equal first on SS13 with Rullo/Marquet and finished the others just a few seconds off the pace to Rullo/Marquet.

Ten-year Targa veterans Rullo/Marquet, who have been Targa West bridesmaids twice and have more DNFs than they’d like to remember, found their rhythm in their new Porsche yesterday, which continued into today. Rullo only drove the Porsche 996 Turbo (the car that saw Peter Major / Ben Searcy take the win last year) for the first time on Monday.

Rullo said that they took at conservative approach today in a bid to maintain their lead over White/Thompson.

“We’re still pushing but minimising risks,” Rullo said. “Today’s stages better suited our car and the battle with Will is keeping us on our toes.”

White reported that he lost the ABS sensor due to some rocks in the wheel and he clipped a curb at the end of SS21 damaging a wheel rim and losing some seconds. Regardless, White has Rullo in his sights and is hungry for the win.

“It was a fun day for sure. We’ll get a good rest tonight and start fresh tomorrow and I’ll be looking to make a good start at Malaga – we were very fast around there last year let’s see if we can close the gap on Rullo a bit,” White said.

Bill Stagoll and his co-driver wife Glenys in their Mitsubishi Evo 9 started the day in second place and were finishing in the top three during the first eight stages. But that came to an abrupt end during SS19 Maryville Downs 1 with a seized clutch, which threw a belt and lost power steering at 190km/h, ending their podium chances.

Despite the disappointment, Stagoll said that he hoped to repair the issues and restart tomorrow for a bit a fun.

Finishing in third place today was Mark Greenham and co-driver Stephanie Esterbauer in their 2006 Mitsubishi Evo 9, 2:19 minutes behind White/Thompson and 3:33 minutes behind the leaders Rullo/Marquet.

Greenham said that they replaced the turbo that had been broken all day yesterday.

“We’ve had a better day for sure and had a good clean run. We’re focussed now on finishing Targa,” Greenham said. “Hopefully on the podium.”

Searcy said that they were reasonably happy with their position.

“Of course we’d love a podium finish but we have to make up a fair bit of time for that to happen and we have three cars less than 20 seconds behind us too – so tomorrow it’s going to be on like Donkey Kong!”

Rounding out the top five in a 2003 Mitsubishi Evo 8 is Brendan Templeman and Peter Howlett who dropped three places from yesterday and finished 6 seconds behind O’Dowd/Searcy and 4:54 minutes behind Rullo/Marquet.

Interestingly, Templeman who is competing in his tenth consecutive Targa West, reported that he doesn’t look at the results all day until after the last stage is complete. It may be just as well because he lost quite a bit of time on SS23 Bullsbrook Long 2.

“I misjudged a section and ended up in the bush and in a boggy area. We got out but had about 20 kilograms of mud in the wheel and wheel arch, which caused a severe vibration, so we had to back off. It’s a bit disappointing but the car’s straight and we’ve been having fun,” Templeman said.

In other news, rookies Mark Cates and co-driver Pete Davies have maintained the gaffer tape that’s holding the passenger door on after it was ripped off yesterday when co-driver Davies opened it at same time Cates reversed alongside a tree. The duo posted some fast stage times today, their best a second on SS22 Bullsbrook Short 1, but had to miss two stages because of a blown $1.50 fuse.

“The taillight fuse is on the same circuit as the gearbox, so we were locked out of the gearbox – just gutted. Anyway, we found the problem, fixed it and we restarted the rally. There’s no pressure on us so it’s all for fun from here on. Still, it’d be really nice to get a stage win, so we’ll be pushing tomorrow,” said Cates. 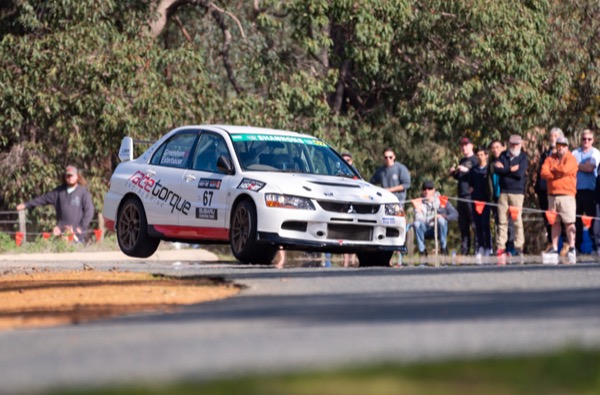 The Dobson domination continues in the Competition Classic category with Mark Dobson and co-driver Nigel Jones in their 1975 Triumph TR7 V8 winning 11 of 14 stages and finishing the others in second.

“We backed off a little in the last four stages to preserve our lead, the car, the driver and navigator. I’ve got to give credit to Nigel, he’s done a great job.”

Dobson/Jones finished the day 2:52 minutes ahead of 12-time Targa veteran Simon Lingford and wife Susannah in their 1973 Datsun 240Z.

Rounding out the top three in the Competition Classic category was Bruce Lake and Peter Hall in a 1971 Datsun 240z who finished 21 seconds behind Lingford/Lingford and 3:13 minutes behind leaders Dobson/Jones.

“It’s been great – especially Maryville Downs and it was good to see crowds of people watching,” said Lake, who is contesting his eighth Targa West.

“I’ve won the Challenge category three times and my best finish in the Competition category is fourth – so a podium this year would be good. We’ll be keeping it steady tomorrow to finish.”

In other news, it was a disappointing retirement for Wayne Turner and co-driver Greg Butcher in their stunning classic, a 1964 Ford Sprint.

Turner, who has competed in Targa West for the past 11 years, said it hadn’t been the weekend he’d hoped for.

“We burnt the clutch out today on Stage 18 – too many hill starts I reckon, and then the carburettor caught fire as we were backing it onto the tilt truck, smoke everywhere. Yesterday we broke a spring, so it’s been disappointing really, but that’s racing,” said Turner from Lecshenault.

“I’d like to thank the event organisers and all the volunteers and officials for the past eleven years, now I’m hanging up the boots.”

Kim Stewart and a new co-driver this year, Jeff Sadler, had a great day in their thundering 1965 Ford Mustang GT350 finishing Leg 2 in fifth place.

“The car is running well – I’ve had this car for 30 years. We’re replacing the brake rudders because they aren’t perfect, so we slowed a little toward the end of the day,” said Steward, a 13-time Targa West competitor.

His team mate also in 1965 Ford Mustang is competitor Paul Crute and his co-driver Paul Gusterson who had a hiccup when the alternator came loose which caused the fan belt to break in the last stage.

“Our crew came out and replaced the fan belt, so we missed that stage, but it’s all good,” said Crute, an eight-time Targa West competitor. “Besides that, we had a good day – I like the camaraderie of the event.”

The gaffer tape is still holding together the back end of Justin Gan’s 1978 Porsche 911SC after a crash on Thursday. Gan reported that the car is running perfectly and he’s back on the pace.

“I’m looking forward to Malaga tomorrow and I’ll be going as hard and I can there and in the city.” 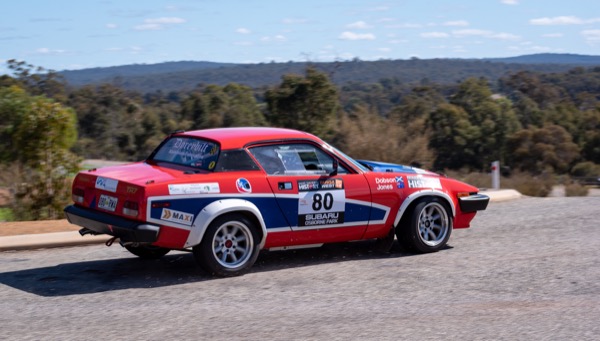 “Today was bit different to yesterday and I’m loving the road racing with corners, crests, hills and dips. It was good to see the crowds come out to watch too,” said the 18-year-old P-plate driver.

“I’m looking forward to the Malaga and City stages tomorrow which I think will suit the Lotus as there’ll be lots of hard braking and not too much throttle.”

Mitic/Duckworth finished Leg 2 with a healthy 6:04 minute lead over John and Kevin Ellement in a 2012 Porsche 911.

The event’s only electric car competitor, husband and wife team Jurgen and Helen Lunsmann in a 2011 Tesla Roadster missed three of the day’s later stages, reportedly to recharge the battery, before restarting to finish the Leg in fourth position overall.

The 2 Day Rallye began today, designed for competitors who just want to take part in the weekend stages. Four vehicles entered this category including rookies Cody Harris and co-driver Jacob Zurzolo in a 2004 Mitsubishi Evo 8 who finished fastest at the end of today’s 14 stages.

Van Kann generously donated the money he saved from competing in the full event toward Harris’ entry.

“I mentioned to my lifelong friend and Targa West Event Director Ross Tapper that our decision to do the two day event was based on the availability of time rather than the availability of budget – and asked whether I could sponsor the rally in some way. Ross told me about Cody who was struggling to stretch his budget to enter,” Van Kann said.

For those in the motorsport community who know Van Kann, this isn’t an unusual offer from a man who is well-known for his generosity in helping young people get a start in the sport he loves. 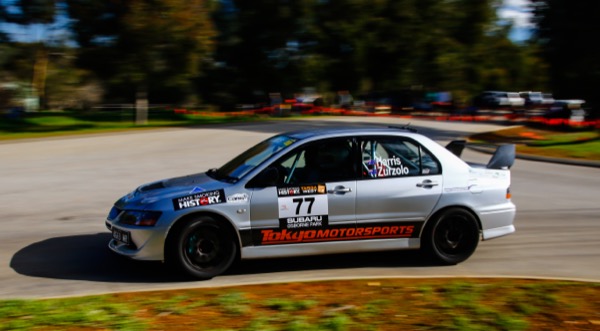 Tomorrow (Sunday) is Leg 3 (Day 4) and the final day of the Make Smoking History Targa West with six stages in the Perth metropolitan area, 33.28 competitive kilometres and a total distance of 97 kilometres. The first three stages will be in Malaga from 8.45am and include a thrilling drifting display by DriftWest and a Targa West parade lap.

The competition will then move to the City of Perth for three stages around the Riverside Drive and Langley Park precinct which will be packed with motorsport and motoring action all day.

It’s free to spectate and more information including spectator points and live results can be found here.

This year marks the 14th running of Targa West event, WA’s premier tarmac rally. Those competing in the full four days of competition will have travelled 766 kilometres around Perth including 223 kilometres of flat out competition by the time they cross finish line on Sunday.

About 600 vehicles will be on displays at Langley Park as motorsport action takes place alongside Riverside Drive on Sunday. Credit: Absolute Edge Media