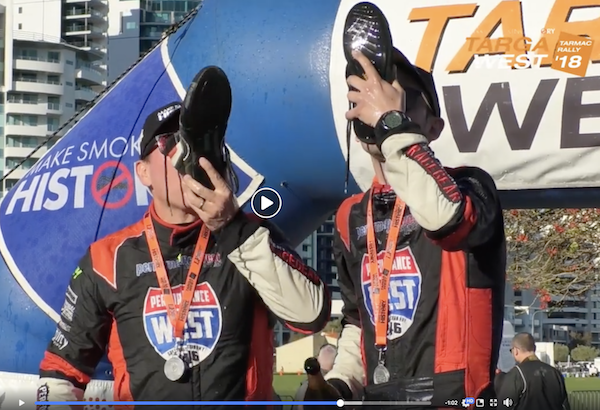 VIDEO: Interviews with the winners with Dean Herridge. Click to play

Sunny winter weather and motorsport action were the perfect crowd magnets for the final day of Make Smoking History Targa West as thousands turned out to spectate the street-circuit rally action.

Competitors tackled six short stages – three in Malaga in the morning and three along Riverside Drive in the afternoon to complete WA’s premier tarmac rally. With just over 35 competitive kilometres on the day’s itinerary, competitors wanting to better their overall place had to push hard from the very start and those wanting to preserve had to exercise patience and minimise risks. It all made for an exciting finish, which was celebrated with the Podium Finish, champagne spray and even a ‘shoey’ on Riverside Drive in the City of Perth.

The dare-devil drifters from DriftWest put on a jaw-dropping performance of sideways slides, skids and smoking tyres in between stage runs at Malaga, while the City of Perth hosted the Targa City Sprint with exotic, historic and classic cars giving spectators a full day of on-track and off-track motorsport entertainment at Langley Park.

In the City, the inaugural Celebration of Motorsport mega-display of 300 historic, modern, muscle and racing cars, bikes and boats and the magnificent machines in the Shannons Classics on the Park were well received by event-goers and stallholders alike.

“First and foremost, it was safe which is always a priority. Everything came together well, the competition was exciting, we’ve had thousands of spectators across the four days and I’m proud of the team and volunteers who make it all happen. It’s a satisfying feeling and very rewarding when everything gels like it has today,” Tapper said.

The 14th Make Smoking History Targa West was held over four days in Perth and surrounds from Thursday 9 August to Sunday 12 August.

The battle in the Competition Modern wasn’t over until the final stage was done with Peter Rullo and James Marquet in a Porsche 996 Turbo protecting their lead of 1:14 minutes, while Will White and co-driver Matt Thompson in their 2006 Mitsubishi Lancer Evo 9 did everything they could to catch them.

Despite White/Thompson putting the pedal to the metal winning the first five of the day’s six stages and second in the last stage to close the gap to 51 seconds, it wasn’t enough to beat Rullo/Marquet who played a strategic game and protected their position to finish on the top in their maiden victory.

No longer the bridesmaids, ten-year Targa West veterans Rullo/Marquet, were fighting nerves during the day and drove at a steady pace, which paid dividends.

“This has been ten years in the making and I couldn’t be happier, I’m ecstatic!” said Rullo, who celebrated Ricciardo-style with a ‘shoey’ on the podium after the champagne spray.

“I’d like to thank Ross and Jan Tapper and the organisers, all the volunteers, my fellow competitors for keeping me honest, Team DDTB, Peter Major for leasing me his winning car, my family, my co-driver Jimmy and everyone who’s helped us over the past ten years,” said the Gooseberry Hill resident.

Grappling the bittersweet feeling of wanting the win yet proud with second place, White said he did everything he could to try and claw back the lead.

“It’s one of those things – we lost 50 seconds on the second day when we blew an intercooler hose and I got some speed penalties which put us behind, and we put up a good fight but just couldn’t get there – credit to the Porsche, it’s a very quick car,” White from Dardanup said.

“The Mitsubishi has done us proud, I’m stoked, it’s been a fun event and all possible thanks to my sponsors Store Local, Tyre Power Bunbury and High Speed Engineering. I’ll be back next year,” White said.

Finishing in third place was Mark Greenham and co-driver Stephanie Esterbauer in their 2006 Mitsubishi Evo 9, 2:58 minutes behind White/Thompson and 3:48 minutes behind winners Rullo/Marquet.

Greenham/Esterbauer endured losing turbo early on in Day 1, struggling and unable to push, dropping time. After the turbo was replaced on Thursday, the duo put in consistent good performances to take the final step on the podium.

“I’m stoked and given the issues we started with, it’s a brilliant result,” said Greenham from High Wycombe.

“We started today with big gap on either side of us, so there was no point pushing or doing anything crazy. Finishing third is amazing and a massive thanks to Race Torque and to my co-driver Steph.”

Not having the luxury of big gaps either side of them, John O’Dowd and last year’s Targa West champion co-driver Ben Searcy had three competitors within 15 seconds behind them at the start of Leg 3. The gap had closed to just 1 second at the start of the City of Perth stages as Brendan Templeman and Peter Howlett in their a 2003 Mitsubishi Evo 8 pushed to catch them.

O’Dowd/Searcy did what they had to do to maintain their position and drove like the clappers in the last three stages to finish the event in fourth, 7 seconds ahead of Templeman/Howlett, and 5:12 minutes behind the winners.

The crowd favourite on the city stages was the impossible-to-ignore 2007 Chevrolet Corvette of Chris Caruso and co-driver Alex White who put on a show with plenty of tyre screeching and sideways cornering.

Rookies Mark Cates and co-driver Pete Davies who suffered some mishaps in what was their only second rally ever (the duo competed in Targa South West in May) had nothing to lose after sliding down the rankings yesterday due to two missed stages because of a burnt out $1.50 fuse. Cates/Davies gave it everything in a bid and notch up a stage win. It’ll have to be added to their goals for 2019 because their best result was a second fastest time on SS28 just three seconds off the pace.

“I’ve had an absolute ball and will be doing a whole lot more rallying in the future,” said Cates. That’s a good thing because he bought Peter Rullo’s 2012 Nissan GTR that finished second last year and has proven he has the pace to keep up.

There was no stopping Mark Dobson and co-driver Nigel Jones in their 1975 Triumph TR7 V8 who started the day with a healthy lead of 2:52 over Simon Lingford and wife Susannah in their 1973 Datsun 240Z to take the win.

“It’s a fantastic rally. Big thanks to my sponsors Doreybit Aluminium Fabrication, 1st Break Accounting and Maxi Metal Industries. My co-driver Nigel has been great. I’ve been doing this event for eight years and I love it.”

Co-driver Nigel Jones is the only competitor to have done every Targa West rally in the event’s 14-year history.

Lingford/Lingford were also happy with finishing second, quite a feat given they nursed their 240Z for the past day and a half as the engine smoked due to a suspected hole in the piston.

“We’ve had to take care of the car but we really wanted to finish so we didn’t give up,” said Lingford, who was the fastest privateer in the London to Sydney Marathon in 2000 in this same car.

Today’s Competition Classic best on ground has to go to Kirk Beardwood and Nives McGavin in their 1985 BME E30 for a clean sweep of stages wins in Leg 3, making up 53 seconds to move up a place and finish third, beating Bruce Lake and Peter Hall in their 1971 Datsun 240Z by 11 seconds.

Justin Gan was all smiles because his 1978 Porsche 911SC that he crashed on Thursday, smashing panels and shifting the rear body, completed the event with the same gaffer tape holding it together. 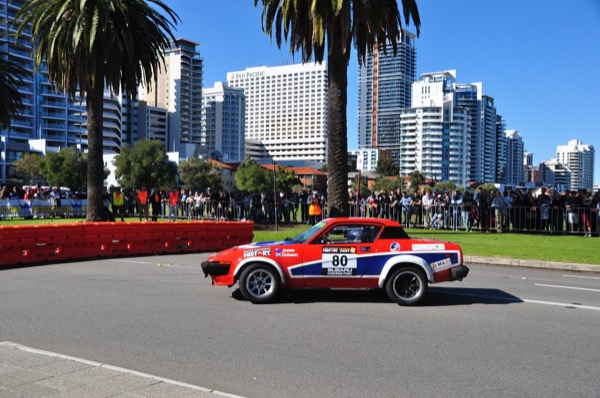 You couldn’t wipe the smile off the fresh face of Nick Mitic and co-driver Geoff Duckworth who won the Challenge category convincingly in their 2017 Lotus Elise by 6:33 minutes over John and Kevin Ellement in a 2012 Porsche 911.

“The Lotus is so well suited to the city stages, it was a lot of fun, I still can’t believe it,” said the 18-year-old P-plate driver in his second attempt at any sort of rally competition.

“Geoff has been a phenomenal co-driver and the Lotus has not skipped a beat. It felt like such a long way to go four days ago and it was a full on event but really awesome, this just feels surreal. I’d definitely like to do more rallies in the future,” Mitic said.

Finishing third somewhat unexpectedly after suffering mechanical issues on Day 1 that saw them drop down the rankings were rookies Michael Brandt and his girlfriend co-driver Rachael Ferrante in their 2002 Mazda RX7.

Kudos to the event’s only electric car competitor, husband and wife team Jurgen and Helen Lunsmann in a 2011 Tesla Roadster who finished Targa West in fourth overall, largely due to penalties for missing stages to recharge the battery during yesterday’s marathon Leg. This team will be one to watch in future years. 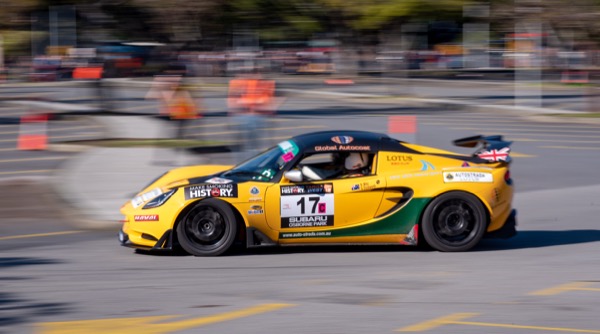 Designed for competitors who just wanted to take part in the weekend stages, the 2 Day Rallye was won convincingly by rookies Cody Harris and co-driver Jacob Zurzolo in a 2004 Mitsubishi Evo 8 who took a clean sweep winning all 14 stages across both days.

“I’m speechless. This is the craziest most intense thing I’ve ever done and I’m so stoked,” said Harris.

“I am so grateful to Andy Van Kann, he and Ross [Tapper, Event Director] have made my dreams come true,” said the 23-year-old Aldi Northam Store Manager.

Van Kann generously donated the money he saved from competing in the full event toward Harris’ entry. For the past 10 years, Van Kann has dedicated his time to mentoring young people in the sport of rallying, a sport he loves and has been involved with for almost 50 years.

At the finish line, an emotional Van Kann recalled how four of the podium finishers across all categories have been competitors he has mentored.

This year was the 14th running of Targa West, WA’s premiere tarmac rally. Those competing in the full four days of competition have travelled 766 kilometres around Perth including 223 kilometres of flat out competition.

Full results can be found on our results page and photos, videos and updates on our Targa West Events Facebook page.